On March 6, 1888, a young Mississippi legislature granted a "handwritten" charter to a group of businessmen and farmers who would raise $50,000 to open Citizens Savings Bank. From their first location in a store on a dirt street in downtown Meridian, Citizens National's early directors and officers began building a foundation of trust with new customers and a new and growing community—a trust that would be severely tested years later in the Great Depression.

While The Great Depression took its toll on this country's young banking community, Citizens National stood firm. And when the nation's remaining banks reopened following President Franklin Roosevelt's emergency "bank holiday" on March 14, 1933, Citizens National was one of only six banks in the state of Mississippi to begin serving the public immediately. Excluding the federally imposed holiday, Citizens National has never closed its doors or broken its trust with depositors, even during the most challenging days of the Depression.

Since those early days, we've steadily grown by staying focused on our customers and the communities where they live. Today, Citizens National serves 15 communities throughout Mississippi, and most of our growth to over $1 billion in assets has come from our internal operations. In other words, we haven't purchased the majority of our growth by simply acquiring other community banks, but have gained our growth "the old-fashioned way" - we've earned it from our customers! 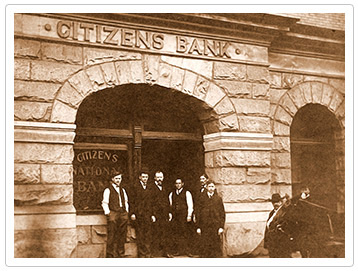 Since those early days, we've steadily grown by staying focused on our customers and the communities where they live.

While the dark days of the Depression are hopefully behind us forever, we see another threat to the economy of Mississippi as more and more community banks are disappearing, being acquired by large regional banking institutions. Many of these institutions have moved both ownership and resources out of the state of Mississippi and have become too big to be caring and responsive to their customers. In spite of this trend, we intend to stay true to our century-old heritage as an independent community bank—to remain independent and keep our vision fixed on our customers and the communities we serve. We feel so strongly about this commitment we have established our own Declaration of Independence. We hope you will read it and be encouraged by it!

While we hope our Declaration of Independence illustrates our total commitment to being here for you in the future, we also want you to know that we are dedicated to being the bank of choice for you—both now and in the future. Come see us and experience the commitment we have when it comes to caring for our clients and fulfilling their financial dreams.